by Rich.R at Yesterday, 07:21 AM 3 comments
The following changes to roles and assignments are effective as of today SEP 25 2020.

Please take a moment to congratulate the above on their new roles.
Continue reading...
Büchner.L - Welcome to 1st Air Assault

Welcome to 1st Air Assault, we are lucky to have you!

Welcome to 1st Air Assault, we are lucky to have you!

Seven (7) members did not respond to roll call this week. The deadline was Friday. In no measure is this acceptable. If you need to know why it’s is unacceptable please go here and read this thread - http://1stairassault.com/forums/showthread.php?tid=1018

Six (6) Members-in-Training did not respond to the FST roll call. This is not acceptable either. New members have 5 weeks to complete their FST. If not completed in that time, membership can be withdrawn.

This group has few rules, with respect being one of three core values we have. If members cannot respond to the needed roll calls, they are NOT respecting the group, trainers or mission makers.

If you are among the number mentioned in this post, go here and read this http://1stairassault.com/forums/showthread.php?tid=1018

If you haven’t R&U to that post you need to.

If you are not responding to required forum posts or Personal Messages on the forums, membership can be withdrawn. Discord is NOT considered official communications for the group.

Finally, every member should understand- if the three core values of Honor, Effort and Respect are not being followed and exhibited, membership can be withdrawn.

These values are expected from every member. The above lack of response is not exhibiting at least two of these core values.

If you feel you cannot respond to any of the above as required, please send a Personal Message on the forum to all of EC
Continue reading...
Completion of Combat Medic Training - 19 SEP 2020

Completion of this training qualifies members for the role of Combat Medic or Combat Lifesaver in 1st Air Assault. 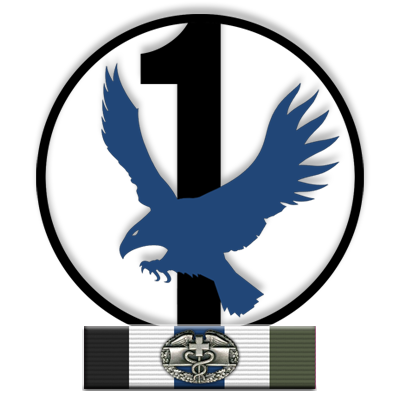 by Gary.B at 09-19-2020, 07:15 AM 3 comments
The following Members in Training have completed Module One of 1st Air Assault's Fundamental Skills Training.

Join us in congratulating them for their hard work, focus and most of all, being one step to closer to completing the Fundamental Skill Training.

Join us in congratulating them for their hard work, focus and most of
all, being one step to closer to completing the Fundamental Skill
Training.

Members in Training
Trainers
Assisted By

by Themelis.J at 09-13-2020, 05:41 PM 1 comments
I know we wanted to keep things brief with all the guys we had on the mission today so this is just some thoughts I wanted to include so we can tackle these moving forward, and also give the newer members an idea of things we can work on when trainings pop up in the future. All the guys here know I tend to ramble, feel free to not read this at all if its gets too long.

First off, thanks to all who could make it, it helps the members assigned to leadership roles tremendously when everybody attending actually attends and it allows us to maximize our game time. Today was great fun like all of our ops I saw great coordination between all assets, great teamwork and a willingness to give 100% from everybody whether it was tackling an objective or working through an ArmA error to get back to your team. This is just a highlight of what I saw, what I noticed, and what I think is important for us to focus on to get even better moving forward.

Communication today was pretty rocky all around in Alpha. Information being passed to your team or to your team lead needs to follow our ABC’s we discuss in the FSTs. If there’s a contact, I need to know his direction, how many there are and how far away they are QUICKLY. Telling me they are behind us when we are in a 360 perimeter does not help anyone. Keep contact reports simple! If theres a bad dude really close by and you don't have time, just smoke him and report the contact when you can.

Mission critical information ALWAYS has priority! If we are currently taking effective fire and dealing with casualties and setting up a proper defense it is not the time to discuss who needs a morphine shot, the team leader needs open comms to effectively coordinate his guys and do his job to the best of his ability and the team members need open comms to report on the situation. There is a time and place for all information passed over comms.

There were several times at the end when Alpha was set up in the castle and Alpha 1-1 had to state MULTIPLE times to not engage the targets in the city, that we were only an observation team to assist the main effort. Yet it continued to happen to the point where we were barely observing and instead had to deal with casualties from the fight and had people run out of ammo. I know we had some newer guys with Alpha today, I don’t mean to ruin the fun but not every single mission is going to be a run and gun where everybody gets 20 kills, it just doesn’t happen. And it shows a big lack of respect for your team leader if he has to politely tell you to please stop firing into the city several times. I’m shocked that 0-A (who had Zeus powers) didn’t send 30 enemies or call indirect fire and completely crush us because we kept firing.

You may think I was a bit harsh for constantly talking on the radio telling you guys to clean up the formations, and that’s fair. However, I know for a fact all the members of Alpha today have passed FST 2 which covers formations in depth. If you do not recall what a formation looks like or where you should be, nobody will be upset just please tell us over comms! If you just assume a random spot then we are just a big blob of troops moving around and the effectiveness of our team is greatly reduced because of the lack of cohesion and a well placed grenade or automatic weapons burst can mean 4 casualties instead of 1.

I know it comes off blunt, this is just stuff to keep in our minds as we progress, we only get better! Excellent job by all today, looking forward to our next mission. Add your feedback below if you want! Figured 1AA Mission Review section of the forums was the best spot to put this, if not then feel free to move it to a more appropriate place, EC. Thanks.
Continue reading...
Gary - Famed IED Hunter!